For the first time this year, the Faculty funded a bursary for a Student Foreign Elective. Tatiana Zhelezniakova went and spent a few months in Cape Town, South Africa. As you can read in her report below, this pilot was a success and we will look at implementing it again in 2019. Applications will be open from September so keep an eye on this website for more information! 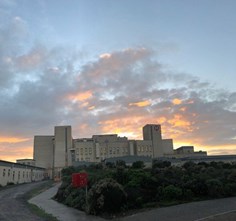 'When I set out on my elective, I was looking into the management of Traumatic Cardiac Arrests (TCAs). In the UK, there is a ‘bundle’ applied in TCA treatment, to include key diagnostic, monitoring and treatment factors. These ensure a logical pathway through management, starting at confirmation of a TCA and following onto intubation, oxygenation, bilateral thoracostomies etc. I was hoping to find a similar approach in practice in South Africa, and while a treatment algorithm exists, I only saw it applied once. The sad truth is that if a patient that arrests due to trauma pre-hospitally, unless they’re very lucky, or very close, it is unlikely that the TCA will be managed successfully. While I wanted to learn about a specific condition, I ended up understanding a much bigger picture about the state of pre-hospital care in South Africa.

Cape Town is a city of incredible divisions. You can drive for 10 minutes and get from beach front houses to expanses of townships. One is a safe place for an ambulance to go, the other will likely put paramedics under fire. The private hospitals and their ambulance companies cater to all with health insurance, while the designated government hospitals and ambulances take on the population who are not able to afford this care. Having talked to paramedics in the government ambulances bringing patients to Mitchell’s Plain District Hospital, where I undertook the majority of my elective, it seems their main goal is rapid evacuation. They have the ability to carry out rapid skills like cannulation and to treat on scene, but the risk benefit analysis is not in their favor. The crews have to be escorted by police due to recent ambulance robberies, and so can hardly stop to perform a thoracotomy in-situ. A pre-hospital doctor once told me a joke: “What’s the most important fluid in pre-hospital resuscitation? The petrol in the ambulance that gets the patient to hospital.” I don’t think I had ever felt its significance as much as I have on my elective in Cape Town, South Africa.

On my shift with the private Life Healthcare ambulance car, my experience was the opposite of my in-hospital time at Mitchell’s Plain Emergency Centre. We got a total of two calls in 12 hours – both of which required little intervention, but were valuable experiences. One was for a car driving off a steep mountain road, rendering driver and passengers shocked but completely unscathed. The other was perhaps the most difficult. An elderly woman had called to say she thought her husband was unwell. On arrival, it was unfortunately clear that he had passed away several hours ago – and here, in a tiny house, we had to break the news to someone who was completely unaware of this. I expected trauma and adrenaline on my ambulance shift, but instead, more importantly, got a sharp reminder of how important human factors are at any time and any place in our profession.

The Emergency Department at Mitchell’s Plain mainly serves the nearby townships, and to say my time there was a baptism of fire would be putting it lightly. I arrived a short time after the original ED had burned down, so the space currently used was a former outpatient clinic, putting construction workers less than two meters from patients in the ‘resus’ area. By the end of my first day I had taken a history from a patient who had been stabbed (and was still treated in ‘minors’ because he could sit up) and seen a first-presentation diabetic who had to be told they will need a double below-the-knee amputation due to their advanced disease. There was no time for surprise, you had to get with the situation pretty quickly. By the time I was doing my weekend night shifts, I had to accept that we were moving on from a stabbed abdomen to a gunshot to the chest because the second patient was dangerously unstable, while the first still had an acceptable blood pressure. 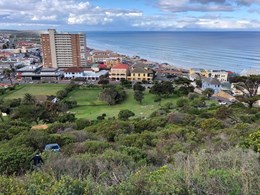 During my time at this ED, I have had an exponential increase in skill practice (skills performed included Rapid Sequence Intubation (RSI), Intercostal Chest Drain placement, Cardio-Pulmonary Resuscitation, Lumbar Puncture, Suturing and wound management, abscess drainage, cast application, venepuncture and establishing intravenous access) and an understanding of the best use of limited resources, despite fantastic medical knowledge. One of the most obvious repercussions for me now is the pain of seeing the sheer waste of potentially re-usable suturing instruments and other materials.

Overall, my experience has allowed me to understand the effects of a real abundance of severe trauma on hospitals. I saw the poignancy of true affection for patients and the lightning-speed triage of gunshot victims with massive hemorrhage. I am now even more appreciative of the fact that we are able to have Pre-Hospital Emergency Medicine as a sub-specialty not stemmed by pressing evacuation time, except in the most extreme of circumstances. I very much hope to come back post-qualifying to engage even more with the medical teams working on the ground, and in government ambulances to get a better perspective of the true burden on pre-hospital services.'